On Saturday 12th January seven boats launched from the beach beside the Langstone Mill and rowed up Chichester Harbour. The flotilla was made up of two Solent Galleys, a Claydon Skiff, a Teifi and two Bursledon Gigs.  The Bursledon Gigs were visiting from the rowing section of Tudor Sailing Club who kindly brought them over for the Langstone Rowing Club to try.  Bursledon Gigs are 15ft rowing boats which can be rowed by three or four rowers.  Stroke and Bow oars are sweep and the central position has two oars which can be rowed by a sculler or two rowers sitting side by side. More to follow on these interesting boats. 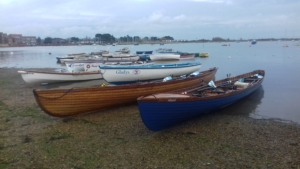